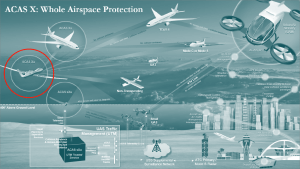 Very quietly this December, the Radio Technical Commission for Aeronautics (RTCA) published the new DO-386 standard.  However, for those of us serving up situational awareness for unmanned aerial vehicles (UAVs), we are loudly celebrating this achievement. For the first time, DO-386 defines the Minimum Operational Performance Standards (MOPS) for unmanned aircraft flying with ACAS Xu, setting the stage for true detect and avoid (DAA) system development and deployment and integration of UAS in the NAS.

Sagetech sits on the two committees responsible for this landmark publication, the SC-147 ACAS committee and the SC-228 unmanned aerial vehicle committee. Rather than toss more acronyms your way, David Day, our Chief Compliance Officer, outlined these key takeaways to help the industry understand this truly historic event.

In addition to the traditional Airborne Collision Avoidance System (ACAS) Xa for manned aircraft, the industry created a few new ACAS classes for unmanned aircraft. ACAS Xu is specifically for UAS, and defined well by NASA:

“ACAS Xu is designed for UAS and allows for new surveillance technologies and tailored logic for platforms with different performance characteristics. In addition to Collision Avoidance (CA) alerting and guidance, ACAS Xu is being tuned to provide RWC (remain well clear) alerting and guidance in compliance with the SC 228 DAA MOPS. With a single logic performing both RWC and CA functions, ACAS Xu will provide the industry with an integrated DAA solution that addresses many of the interoperability shortcomings of Phase I systems.”

From the RTCA website, here is the DO-386 MOPS official description:

Unmanned systems that are expected to require ACAS Xu equipment include those flying >400 AGL and weighing more than 55 pounds. This is not expected to include future air taxis, which will fly in compliance with a separate ACAS designation – Xr.

Until now, UAS operators were required to fly in special areas, or fly tethered, or hire dedicated spotters to fly BVLOS (beyond visual line of sight). FAA waivers for BVLOS have been available, but difficult to obtain and requiring significant safety case justifications. DO-386 eliminates this hassle by creating new requirements for logic-based, FAA-certifiable detect and avoid systems, requiring transponders and interrogators at the core, that enable UAS to autonomously detect and avoid other aircraft without requiring pilot sight. These certifiable systems will eliminate the need for FAA waivers for unmanned aircraft in the national air space. Much like manned aircraft, operators of UAVs equipped with DAA and ACAS Xu equipment, and possessing an aircraft type certification, will be able to file a flight plan and take off.

The new MOPS set the stage for near-term DAA systems to be developed and certified for use on unmanned aircraft, same as manned aircraft. At Sagetech, we’re pleased to see the industry agree with us that unmanned aircraft must be equipped with surveillance and collision avoidance technology like manned aircraft operating in Part 91 national airspace.

So, with this important step complete, what is next? “There will be another set of MOPS for how DAA systems integrate with ACAS and TCAS, DO-365,” explains Day. “Right now, we’re still in Phase 2 of the 3-phase DAA plan put together by FAA and RTCA, where we focus on extending the UAS operation environment to controlled airspace. This is an incredibly exciting time for unmanned aircraft, and at Sagetech we’re proud to support the integration of UAS in the NAS through situational awareness solutions including DAA.”

Read More
See All News
By using this website, you agree to our use of cookies. We use cookies to provide you with a great experience and to help our website run effectively.
ACCEPT
Manage consent

This website uses cookies to improve your experience while you navigate through the website. Out of these, the cookies that are categorized as necessary are stored on your browser as they are essential for the working of basic functionalities of the website. We also use third-party cookies that help us analyze and understand how you use this website. These cookies will be stored in your browser only with your consent. You also have the option to opt-out of these cookies. But opting out of some of these cookies may affect your browsing experience.
Necessary Always Enabled
Necessary cookies are absolutely essential for the website to function properly. This category only includes cookies that ensures basic functionalities and security features of the website. These cookies do not store any personal information.
Non-necessary
Any cookies that may not be particularly necessary for the website to function and is used specifically to collect user personal data via analytics, ads, other embedded contents are termed as non-necessary cookies. It is mandatory to procure user consent prior to running these cookies on your website.
SAVE & ACCEPT